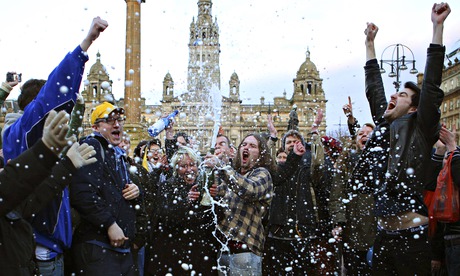 Glaswegians mark Margaret Thatcher’s death. ‘The bulk of Scotland voted against Thatcher, and her brutal dismantling of the 1945 compact shook the union’s foundations,’ Photograph: David Moir/Reuters

For the first time since 1707, Scotland has its sovereignty, honour and dignity within its grasp

Independence is the only way Scotland can realise its full political and cultural potential in the 21st century. This is not always the case when new states are born – the break-up of Yugoslavia is sometimes cited, and with good reason, to demonstrate the opposite. But Yugoslavia was wrecked by the IMF with disastrous consequences: ultra-nationalism, civil war and ethnic cleansings at home exacerbated by a German intervention to divide the country, followed by the Nato bombing. A better analogy for Scotland is Norway’s peaceful and collaborative secession from Sweden in 1905.

Scotland was tricked into the 1707 union with England, sold down the river by what Robert Burns called its “Parcel o’ Rogues”: What force or guile could not subdue, through many warlike ages / Is wrought now by a coward few / for hireling traitor’s wages / The English steel we could disdain / secure in valour’s station / But English gold has been our bane / Such a parcel o’ rogues in a nation.

Later Walter Scott enlarged on this theme: “It may be doubted whether the descendants of the noble lords … who accepted this gratification would be more shocked at the general fact of their ancestors being corrupted or scandalised at the paltry amount of the bribe.”

The weakness in traditional Scottish nationalism lay in its own inability to grasp that identity could not be the only factor in the march to independence. As the late Stephen Maxwell, Tom Nairn and other Scottish intellectuals have pointed out, the union was a compact between the English bourgeoisie and a weak and desperate Scottish elite. The latter obtained entry into English markets and, later, to its colonies in North America and Asia. Five of the British viceroys who ruled India were members of the Scottish gentry. Scottish administrators were a cornerstone of the imperial bureaucracies in Asia and Africa.

For the latter half of the 19th century and the first half of the 20th, the Scottish elites benefited greatly, the subaltern layers less so. (As a proportion of population, Scottish deaths exceeded English ones in the inter-imperialist war of 1914-18.) There were other downsides as well. Scotland’s political identity was destroyed, and a huge Scottish emigration to North America followed the brutal Highland clearances. These included every layer of Scottish society, not just the remnants of the defeated clans. The reasons were not only economic. Many Scots left a country occupied by redcoats.

Two processes combined to reawaken Scotland. The depression of the 30s left a deep mark on the country, and the end of empire that followed a decade later after another war created the basis for new thinking. Until 1945 the Labour party, born in Scotland, had been pledged to Scottish home rule. Clement Attlee’s reforms, it was thought, made the idea redundant, and certainly few in Scotland thought otherwise. But the emergence of a new nationalism was the result of a democratic deficit.

The bulk of Scotland voted against Margaret Thatcher, and her brutal dismantling of the 1945 compact shook the union’s foundations. When Tony Blair followed suit, belittling the Scottish parliament as little more than a local council, the haemorrhaging of Labour votes began. The real tartan Tories in the Scottish parliament today are the visionless careerists of New Labour, incapable of producing a leader with even one-fifth of the qualities that distinguished the late Donald Dewar. Small wonder that support for independence is strongest among working people.

The notion that an independent Scotland will be parochial is risible. The “internationalism” of New Labour and its coalition lookalikes essentially means subordinating the entire British state to the interests of the US. They have made Britain a vassal state: on Iraq, on Afghanistan, on the gathering of intelligence. An independent Scotland could be far more internationalist and would benefit a great deal from links to both Scandinavia and states in other continents.

A campaign of fear, based on dodgy statistics, is under way, with the failed model of anglo-globalisation presented as the only model. Scotland’s sovereignty, honour and dignity are within its grasp for the first time since 1707. It would be a dark day indeed if the parcel o’ rogues triumphed again.

Guardian
Recent posts
From the archive